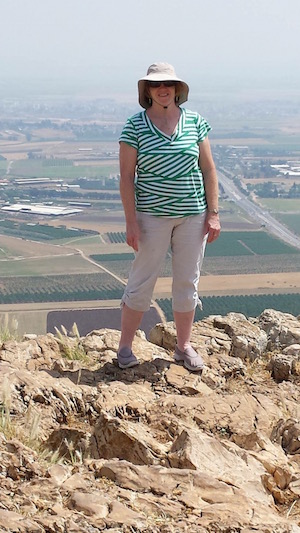 In May I went on a study tour of Israel with my niece, Nancy Long. On our first day there we visited Nazareth, the town where Jesus grew up. We sat in a synagogue like the one where He read from the scroll of Isaiah: “the Spirit of the Lord is upon me, because He has anointed me to preach the gospel to the poor. He has sent me to heal the broken hearted, to proclaim liberty to the captives, and recovery of sight to the blind, to set at liberty those who are oppressed, to proclaim the acceptable year of the Lord.” Then He told the people, “Today this Scripture is fulfilled in your hearing.”

But instead of joyfully receiving this news, the people became angry. “Who is this?” they asked. “Isn’t this the carpenter’s son?” They drove Him out of town and tried to throw him over this cliff where Nancy is standing. The whole story is in Luke 4:16-31.

Because He had grown up among them, they could not believe He was who He claimed to be. But in truth He was not the carpenter’s son, but the Son of God. That he would humble Himself to become a human being, going through the process of gestation, birth, and growing up just like all the rest of us absolutely boggles my mind. He (God) “emptied Himself, taking the form of a bond-servant, and being made in the likeness of men” (Philippians 2:7) so He could identify with our humanity and all its weaknesses. His humanity was so complete; He seemed so ordinary. No wonder the people in His hometown couldn’t recognize Him as anyone else but the carpenter’s son.

I’m glad I know He wasn’t just a great teacher, a good man, but that He was, and is, the Son of God, and that He is my Savior.

Judy A. Knox, et. al (“we” or “us” or “our”) respects the privacy of our users (“user” or “you”). This Privacy Policy explains how we collect, use, … END_OF_DOCUMENT_TOKEN_TO_BE_REPLACED