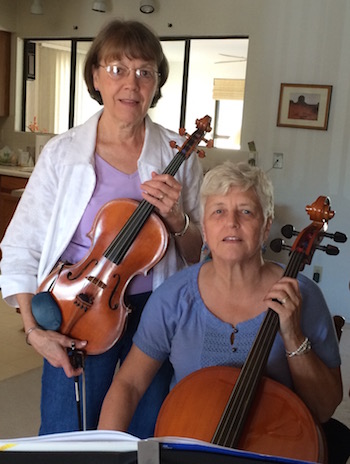 Last winter I spent two months in a 55+ community in Arizona (residents call it the park). I rented a cello so I could play music with my niece who lived nearby. When I first arrived, I casually mentioned in a conversation with God how cool it would be if there would be someone in the park who I could play music with as well as with my niece. Then I promptly forgot I had said it.

A few days later, I visited the park’s writers’ group. Each member read something she had written. One woman, Kaylynn, read the New Years letter she had written to family and friends, in which she mentioned that she and her husband played in a local orchestra. As we were leaving the meeting, I asked her what instrument she played. “Oh, I play the viola,” she answered.

“Oh my goodness,” she replied. “I’ve been praying for another string player in the park to play music with. Would you like to get together sometime?”

During the two months I was there, we discovered many things in common beside our interest in music and writing. God had provided a friend who brought much pleasure to my days there. Was that a coincidence? Well, she had almost decided to read something else that made no mention of her music playing, but at the last minute felt prompted to read the New Years letter.

Had she not chosen to read that, we could have gone the whole two months without discovering our mutual interest, missing out on a very rewarding friendship. Instead, we got to be the answer to each other’s prayers. How cool is that? And we did not let God remain anonymous. We told many people about how He had brought us together. No such thing as a random co-inky-dinky!

Judy A. Knox, et. al (“we” or “us” or “our”) respects the privacy of our users (“user” or “you”). This Privacy Policy explains how we collect, use, … END_OF_DOCUMENT_TOKEN_TO_BE_REPLACED