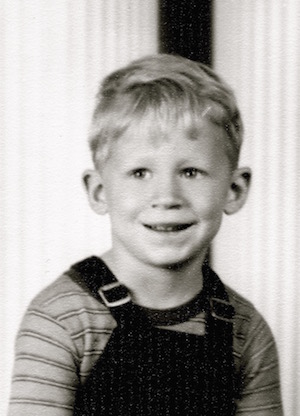 I love this photo of my husband, Alan. Look at that twinkle in his eye! When my grandson Lars was about five, he noticed that picture on the wall at the top of our stairs. He stopped, and he looked, and finally he asked, “Hey, grandma! When did you take that picture of me in black and white?” which totally validated what many people said, that Lars looked like his grandpa! Even Lars could see the resemblance.

The study of genetics, the way traits are passed from one generation to the next, is fascinating. A child may resemble one parent more than the other, but always gets a combination of traits from both parents, making him or her a 100% unique individual not looking exactly like either parent, or like anyone else in the world. Even identical twins don’t look exactly alike.

We can trace not only our physical characteristics, but many personality traits as well, to our parents and grandparents. Some traits are more desirable than others. I am not overly thrilled, for example, to be told I have the “Witt nose.” I’m stuck with this inheritance from my DNA!

As Christians, though, we aren’t stuck. We received a DNA change when we were born again. Our very nature is new (2 Corinthians 5:17). OK, the bad news is that even after being born again I still have the Witt nose. But the good news is that on the inside, I am different. I’m a new creation in Christ. The rest of my life will be a journey of renewing my mind according to the Word of God (Romans 12:2), allowing Him to transform me into His image. More and more I will come to resemble my heavenly Father in my thoughts, words, and actions, as I learn to see things – and people – from His viewpoint.

Amy Grant sang a song back in the 80s called “My Father’s Eyes.” Whenever I hear that song, I think about how awesome it would be if, when people look at my life, they could say, “She has her father’s eyes.”

Judy A. Knox, et. al (“we” or “us” or “our”) respects the privacy of our users (“user” or “you”). This Privacy Policy explains how we collect, use, … END_OF_DOCUMENT_TOKEN_TO_BE_REPLACED