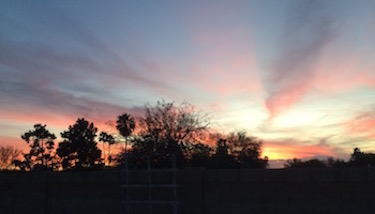 Some Bible passages are like old friends: familiar, comfortable, and showing up just when you need them most. One of my favorites is:

Be anxious for nothing, but in everything by prayer and supplication, with thanksgiving, let your requests be made known to God; and the peace of God, which surpasses all understanding, will guard your hearts and minds through Christ Jesus. – Philippians 4:6-7

Monday was my day to fly south for the winter. Last August, as I made the reservation, I asked God for wisdom. The midday flight on December 28 made the most sense. When December 28 arrived, after a long spell of mild temperatures and almost no snow, it had suddenly turned cold and the Chicago area was engulfed in a sleet and ice storm. I was definitely not thrilled about this, but I knew God had told me to choose that day and flight. I remembered the story in Mark 6:45-53. Jesus had fed a crowd of more than five thousand people with five loaves of bread and two fish, a miracle which His disciples had not only witnessed but had participated in.

Right after that, He told them to get into a boat and cross to the other side of the sea. While they were on the way, a storm came up and they were terrified. I’m sure it was very scary. But after what they had just experienced, they should have known that if Jesus told them to go somewhere, He would be able to help them get there. He came walking on the water and rescued them but was not pleased at their lack of faith.

I didn’t want to make the same mistake. Thanking God for His help in making the reservation, I put in my request – “I’d like to get there today, Lord!” – and held to the fact that since He had been involved when I made the reservation, I could trust Him to get me where I was supposed to go. And whatever happened, I would have peace.

Right before leaving home, I received a message from the airline that my flight was delayed by a half hour, and the cab ride to the airport on icy roads was an adventure in itself. Once there, I checked my bags, enjoyed a nice lunch, then proceeded to my gate where I learned the flight had been delayed another hour.

Passengers for flight 573 waited in the crowded gate area, hearing announcements of flight after flight being canceled, and watching the rebooking line grow longer and longer. Our flight was delayed further. The plane we were to fly on had not arrived at the airport yet. Around 3 PM we were informed that the weather had worsened and no flights would be taking off for anywhere from O’Hare airport until it improved. Passengers who had boarded planes and sat waiting had to get off, including those on the morning flight to Phoenix, who had gotten on and off the plane twice, only to have their flight finally cancelled.

By 5 PM every December 28 American Airlines flight from Chicago to Phoenix had been canceled except ours. Even flights scheduled to leave after ours were canceled because planes coming from northeastern cities were grounded. But then the weather in Chicago improved, the ice and sleet turned to rain, and our plane, which had come from Phoenix, pulled up to the gate. Passengers got off, and a few minutes later we were boarding.

Happy to be on my way, once again I rejoiced in God’s goodness and grace. I was one of the very few people who actually got from Chicago to Arizona that day, but even more important, I was blessed with peace throughout all of it – the peace that surpasses all understanding. Although I arrived a few hours late, I did arrive that day, safely and in a good mood! What an awesome God we serve!

Judy A. Knox, et. al (“we” or “us” or “our”) respects the privacy of our users (“user” or “you”). This Privacy Policy explains how we collect, use, … END_OF_DOCUMENT_TOKEN_TO_BE_REPLACED