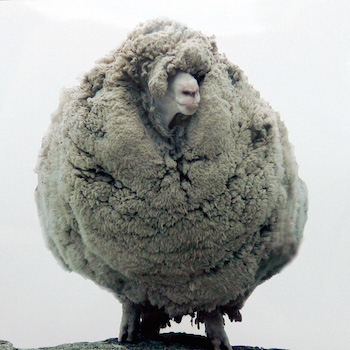 I admit to ambivalent feelings toward Facebook, but once in a while something pops up that really captures my attention, like the story about a sheep named Shrek who so hated being sheared that he hid in a cave to avoid it for six years! He came out looking more like a big ball than a sheep.

Once he made his appearance, his owner immediately took him to be sheared, removing 60 pounds of fleece. And guess what! After the shearing, Shrek seemed to be very happy. What a relief he must have felt to be free of all that weight. I read the story and laughed at Shrek’s cleverness to avoid the dreaded shears.

Then I realized that sometimes I run off and hide in a cave, too, thinking I am so clever, instead of facing up to things I would rather not think about, things God is telling me need to change in my attitude or behavior. I may hide myself in busyness, the Internet, or any number of time-wasters – anything to keep me distracted.

When I finally emerge from the cave and allow my Good Shepherd to remove the excess wool, and I “lay aside every weight, and the sin that so easily ensnares me” (Hebrews 12:1), I feel so much better. I realize I’ve been allowing the enemy to steal, kill, and destroy my peace, joy, and productivity instead of enjoying the abundant life my Shepherd wants me to have (John 10:10). I happily lie down in green pastures beside still waters where He has led me (Psalm 23:2), and once again rest in His love.

Sometimes He does need to remove something from our life for our ultimate benefit. What a wonderful thing when we can trust Him instead of being afraid of the shears.

Book Recommendation: You might enjoy A Shepherd Looks at the Twenty-third Psalm by Phillip Keller, in which a man who spent many years as a sheep owner shares fascinating insights into the nature of those wooly creatures that God compares us to in the Bible.

Judy A. Knox, et. al (“we” or “us” or “our”) respects the privacy of our users (“user” or “you”). This Privacy Policy explains how we collect, use, … END_OF_DOCUMENT_TOKEN_TO_BE_REPLACED