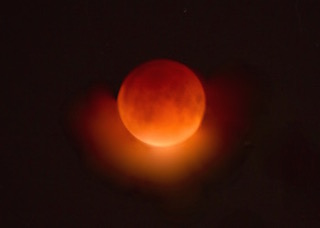 Last weekend there was a lot of excitement over the coming Super Moon Total Eclipse, which also happened to be the fourth Blood Moon in a two-year tetrad, an event believed to have prophetic implications. My friend and former colleague Rich Koerner (www.richardjkoerner.com) took this beautiful photograph of the moon in the middle of the eclipse.

I am fascinated by the workings of our magnificent solar system and always look forward to an eclipse. The fact that scientists can tell us the exact second the moon will enter the earth’s shadow and come back out is amazing to me. This is possible because the positions and motions of the earth and moon in their orbits around the sun are predictable. Sunday night I was delighted over the early time of the eclipse, being able to watch without having to stay up half the night or set an alarm for 3 AM. The weather was nice, the sky was clear. What more could a person ask?

My favorite part is when the tiniest sliver of light becomes a mere point, then suddenly the light disappears altogether and the moon becomes an orange ball reflecting no direct sunlight. Red, orange, yellow, or even brown, it always looks amazing, seeming closer to the earth and very three-dimensional. By 8:45 the moon had dwindled to a narrow crescent. I went inside for a little while and texted my son and daughter to be sure they weren’t missing the spectacle, then headed back outside a few minutes before the really good part was scheduled to happen.

But alas! Instead of seeing the moon slipping into totality, I saw no moon. It simply wasn’t there! Clouds had moved in and were blocking the view. A neighbor and I stood in our prime viewing spot in disbelief. This cool, awesome thing was happening, we were out there ready to see it, and we were missing it. I was very disappointed to be missing my favorite part; nevertheless we knew the moon was right where it was supposed to be, in the earth’s shadow as predicted, even though we couldn’t see it.

We were about to go back inside and call it a night when we noticed some blackness in the sky moving toward where the moon was. Could it be? The clouds were moving away! Soon the fully eclipsed moon popped into view. Pondering the beauty and order of God’s creation, I thought of this verse from one of my favorite hymns:

Summer and winter, seed-time and harvest,

Sun, moon, and stars in their courses above

Join with all nature in manifold witness

To Thy great faithfulness, mercy, and love.

I also thought of this scripture verse: “The heavens declare the glory of God; and the firmament shows His handiwork” (Psalm 19:1). The regularity and predictability of the moon and planets are constant reminders of the dependability of our Creator. He is faithful; we can trust Him. Like the eclipse behind the clouds, even when we can’t see Him at work in our lives, He is there. We can count on it.

By the way, if you missed this one, do not despair. Despite all the hype about the super moon, there will be another total eclipse visible from the U.S. in January, 2018.

Judy A. Knox, et. al (“we” or “us” or “our”) respects the privacy of our users (“user” or “you”). This Privacy Policy explains how we collect, use, … END_OF_DOCUMENT_TOKEN_TO_BE_REPLACED