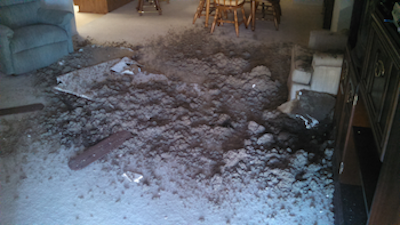 Imagine how my nephew Jon must have felt when he walked into the house I rent in Arizona and saw this! The home belongs to my sister and her husband who live in California, and Jon keeps an eye on it when it’s not rented out. He was there earlier that day, and everything looked fine. Little did any of us know an air conditioner drainpipe had come apart at a seam, allowing water to drip onto the ceiling below. Eventually the water-logged plaster collapsed and fell to the floor, ceiling fan and all. Who knows how long the pipe had been like that? It was probably broken while I was living there last winter, but since I only ran the AC for a few hours a day, the plaster had time to dry out between times and the damage went undetected.

Ordinarily the AC isn’t running while the house is vacant, but my sister and her husband had been there three weeks before, meeting with contractors to arrange a face-lift for the house. Because workmen would be in and out, they kept the AC turned on when they left. If it hadn’t been running for those three weeks, the damage wouldn’t have occurred until after I arrived in November, ruining some of the work that was done during the summer, and I would have had to find a place to stay while repairs were completed. The original plans didn’t include replacing the carpet or the ceiling, so now the house I’ll return to in November will be even nicer than what was originally planned. Fortunately they have good insurance, so it wasn’t a financial disaster, and no one was in the house when the ceiling fell, so there were no injuries.

Romans 8:28 comes to mind. “And we know that all things work together for good to those who love God, to those who are called according to His purpose.” While a collapsed ceiling is not a good thing, much good came from the situation, and it’s easy to see God’s timing and protection. However, another verse spoke to me even louder as I thought about what had occurred: “Catch us the foxes, the little foxes that spoil the vines, for our vines have tender grapes” (Song of Solomon 2:15). These were just little drops of water – drip, drip, drip – but because no one stopped them, they accumulated till eventually a whole big ceiling was ruined, causing major destruction.

How does this apply to our lives? One way is in our thinking patterns. If we allow small, seemingly harmless, negative thoughts to stay in our minds instead of catching them, “bringing every thought into captivity to the obedience of Christ” (2 Corinthians 10:5), they can fester and accumulate in our hearts, waterlogging our attitudes and emotions. Left unchecked, those attitudes and emotions will lead to wrong actions, causing serious damage to our own lives and those of the people around us.

Destructive emotions like anger, envy, and depression do not just happen. They are the results of thinking patterns we have allowed to develop over time. We need to guard our hearts. If we find any little foxes that have managed to sneak in, we must catch and kill them! God is ready to help us with the killing if we bring those foxes to Him.

(No real animals were killed – nor was such a thing advocated – in the writing of this post.)

Judy A. Knox, et. al (“we” or “us” or “our”) respects the privacy of our users (“user” or “you”). This Privacy Policy explains how we collect, use, … END_OF_DOCUMENT_TOKEN_TO_BE_REPLACED